The dream came true: 12 January 2002, an important date for Ulstein Verft. The Minister of Trade and Industry, Ansgar Gabrielsen, officially opened the new dock hall, and 3,000 people came to witness the opening festivities. At the same day, the first Ulstein designed vessel, the Olympic Hercules, was named.

The erection of the dock hall, that was completed in December 2001 and opened in January 2002, improved the working environment considerably. For anyone that had previously struggled outside in rain and snow it was a great relief to get a roof over their heads.

Some six months after the dock hall had been taken in use, the sick absence at the yard had been reduced.

The four welders Aase Dimmen, Jorunn Hatløy, Eldbjørg Wigg and Solveig Erikstad said that the job satisfaction can affect the absence rate considerably, and the dock hall had helped increase the welfare at work. 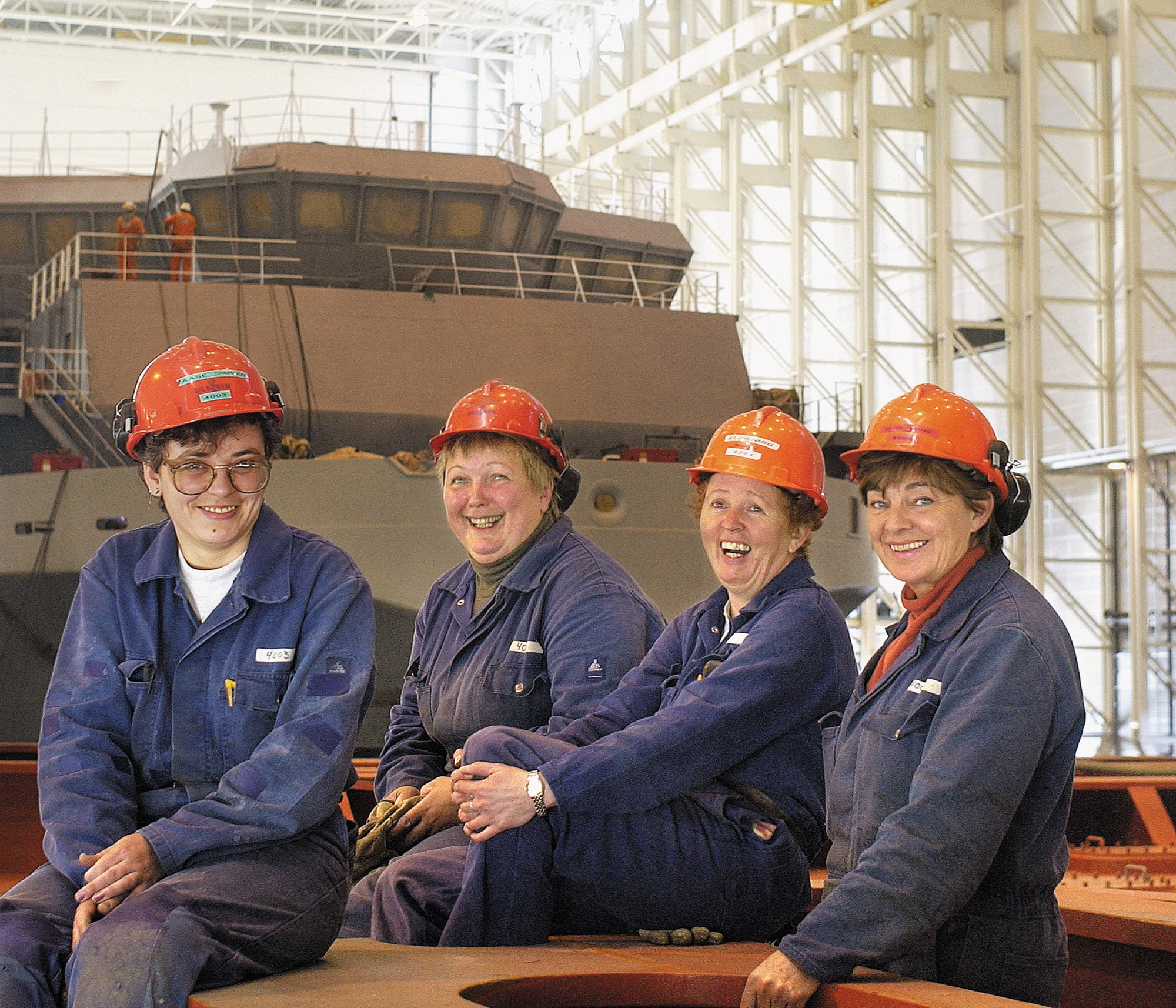 “It is comfortable to work inside the dock hall all year round, no matter what the weather is like. In winter time, we don’t have to think about snow storms, wind or rain. In the hot summer days, we have a nice working temperature inside,” they comment.

“It is a much cleaner and dryer work place for everyone”, states supervisor John Hatløy. “This means a lot to our workers and to the customers receiving our ships. Both the efficiency and quality of painting and welding is higher when we don’t have to do it outdoors.”

“We also have a more structured working day where tools and materials are close to where we’re working. The dock hall will save costs, I’m sure of that. One thing is the time we’ve previously spent on shovelling snow in the winter and to fetch equipment, another aspect is that we no longer have to wrap up the ships being built outdoors. When we are about to paint and install the final equipment on a vessel, we often had to wrap it up previouslu, a process that cost several hundred thousand kroner each time, Hatløy explains.

The erection of the dock hall came as a consequence of increasing productivity at the yard. To get started with this it was imperative to expand the dock and build a dock hall.

Firstly, approximately NOK 80 million had been invested to expand the dock. Then, they were to expand the dock again and also build a new dock hall, which would mean a new investment of NOK 180 million. The total investment would amount to NOK 260 million. This was an enormous risk to take. But this was an either/or situation: If the investment was not made, the company would be phased out relatively quickly, but if the plans were implemented the company could compete for at least another ten years.

The naming of the vessel, Yno 260, was a spectacular happening as it coincided with the official opening of the new dock and dock hall. The contract with Olympic Shipping had been signed in June 2000, and included the design and construction of an anchor handling tug supply vessel of the ULSTEIN A101 design. She is the first vessel based on the ULSTEIN design portfolio which was introduced in 2000.

Olympic Hercules is a Multifunctional Anchor Handling Tug Supply Vessel delivered on 18 January 2002. She has been designed for a wide range of offshore operations, and has large rope and wire capacities and a hotel compliment of high standards.

Despite a poor offshore market for parts of 2002, Olympic Shipping AS reported a good result for the operation of the 'Olympic Hercules'. The vessel completed 44 jobs in 2002, after having been delivered on 18 January, and proved to be suitable for deep-water operations where all her 23,500 horse power is required. According to the shipowner, the ULSTEIN A101 design became attractive in the North Sea after short time due to the combination of size, breadth and power. The high freeboard means that little water approaches deck in heavy seas, making it safer for the crew working on deck.