Vroon took delivery of the platform supply vessel ‘VOS Partner’ on 14 January 2016. The #100 OSV design from ULSTEIN is built at the COSCO Guangdong Shipyard. This is Vroon's third of six vessels of the PX121 design. These PSVs are featuring the X-BOW® feature, which provides smoother movements in harsh conditions. 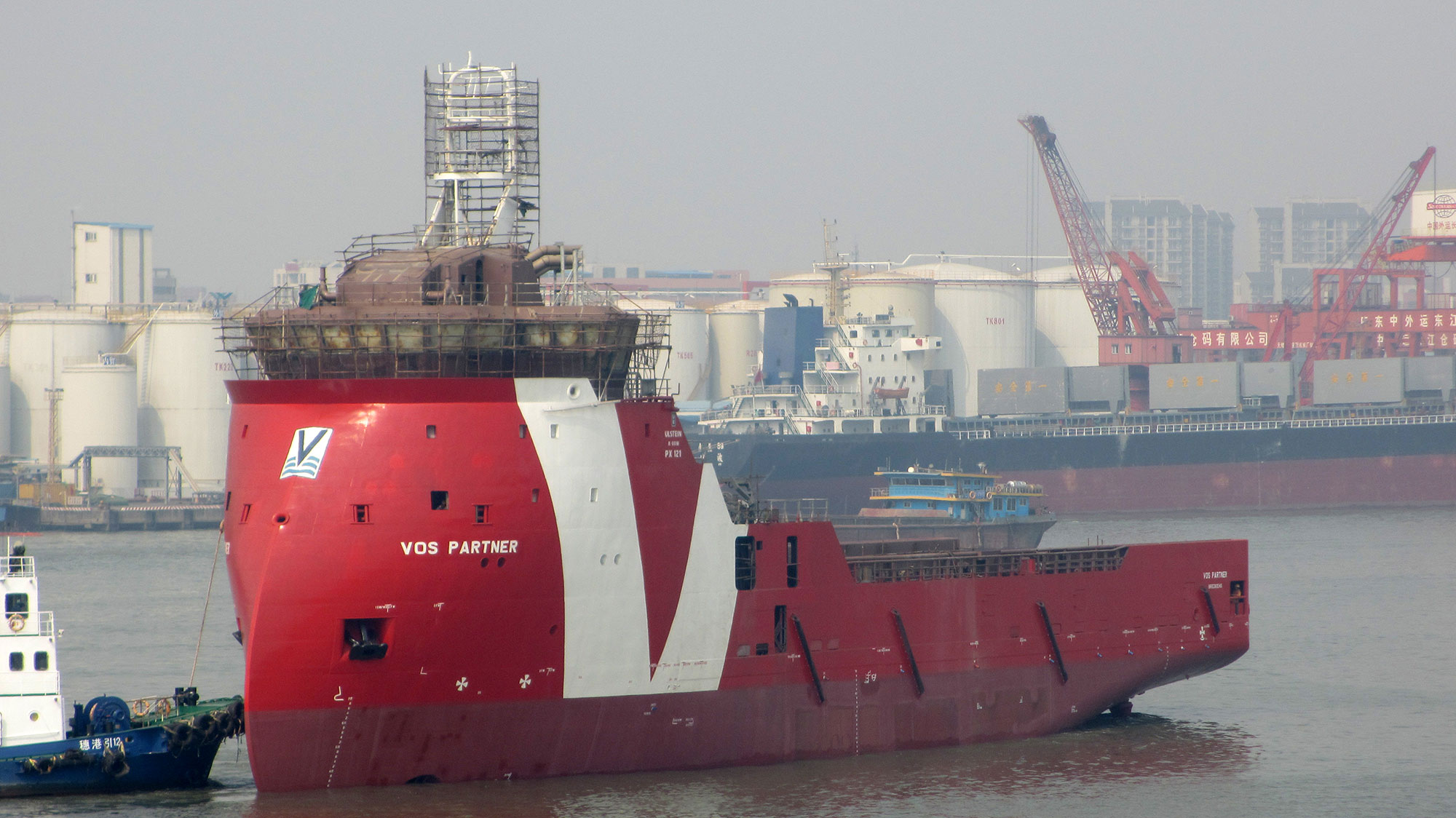 The photo above was taken at the ship's launch in 2015.

VOS Partner complies with ABS class requirements for dynamic-positioning system Class II (DP2) and reduced noise and vibration to satisfy HAB(WB). In combination with the X-BOW® hull line design, these measures guarantee benefits to the charterer in operation and fuel efficiency, as well as higher comfort standards for the crew. With a length of 83.4 metres and a beam of 18 metres, the vessels provide 850 m2 deck space and a load capacity of 4,200 tonnes (dwt).

The remaining PX121s will be delivered later this year and all vessels will operate under the management of Vroon Offshore Services, the Netherlands.

Upon contracting the vessels, the managing director in Vroon Offshore Services, Jan-Piet Baars, commented:
«The PX121 design is part of the new generation of PSVs and it will offer, especially in harsher environments, a unique combination of world class client service delivery, high efficiency and impressive crew comfort.» 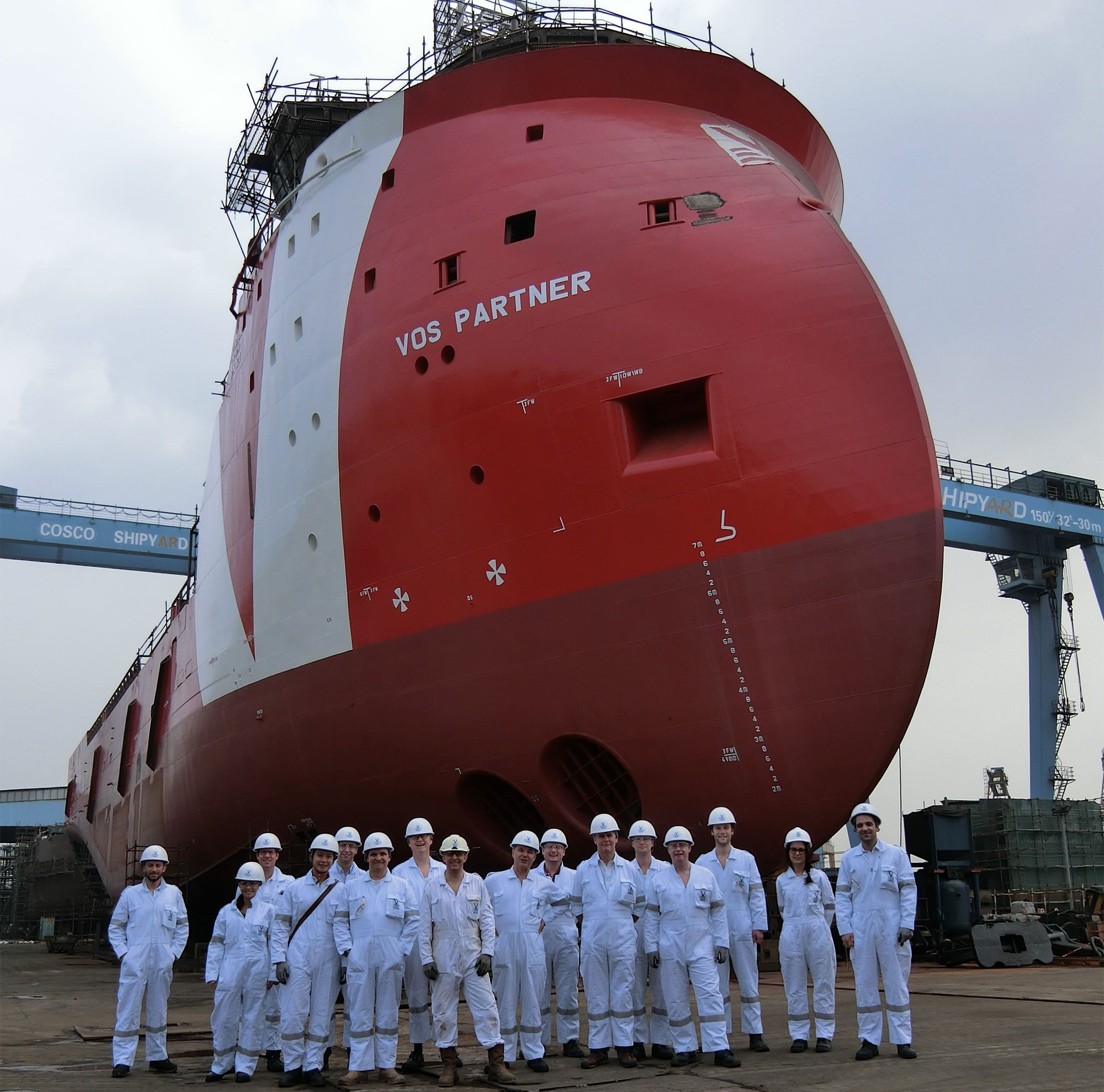 The numbers behind the ‘headline hundred designs’:

Although ULSTEIN’s latest designs were introduced in 1999, the company has a history of developing ship designs that stretches back to the beginning of the 70s (its UT-designs, later sold out of the group, made an early impression). The first of the new generation, the multifunctional anchor handling vessel (AHTS) ‘Olympic Hercules’, was delivered in 2002. However, 2005 was the year that the global shipping market really ‘woke up’ to the power of ULSTEIN designs.

2005 marked the launch of the X–BOW. This revolutionary design, first seen on the AHTS 'Bourbon Orca', reduces movements and eliminates wave slamming and bow impact, stabilising the work platform and improving comfort on board. The unique lines of the hull create tangible performance benefits, with positive effects on fuel-efficiency, speed, and motions, which extend the operational window, especially under poor weather conditions and in rough seas. Test results show that the shape of the hull reduces power consumption by 7-8 per cent compared to vessels with conventional hull lines.

All of the 100 offshore designs have been developed by ULSTEIN’s design company in Ulsteinvik, Ulstein Design & Solutions AS. The team’s specialisms include design concepts for vessels in seismic, offshore construction, IMR and standby/rescue work, as well as PSVs and anchor-handling vessels. In addition, ULSTEIN’s design company in the Netherlands, Ulstein Design & Solutions BV, has developed close to 20 vessels for heavy offshore operations. Among these is the Seven Borealis, which was nominated for the ‘Ship of the Year’ 2012 Award by Offshore Support Journal.

Ulstein Group is headquartered at the west coast of Norway. This country, with a population of only five million people, has the second largest offshore fleet in the world. The Norwegian maritime cluster is renowned for the way its companies are able to collaborate closely in the innovation processes, while the geographical distance between players is small. The naval architects, product developers and ship designers in ULSTEIN cooperate with e.g. shipowners, suppliers, classification societies and state authorities in order to develop and improve our designs. Together we are all focusing increasingly on comfort, health, safety and the environment. The result of this is new and improved solutions that deliver real benefits to the market.